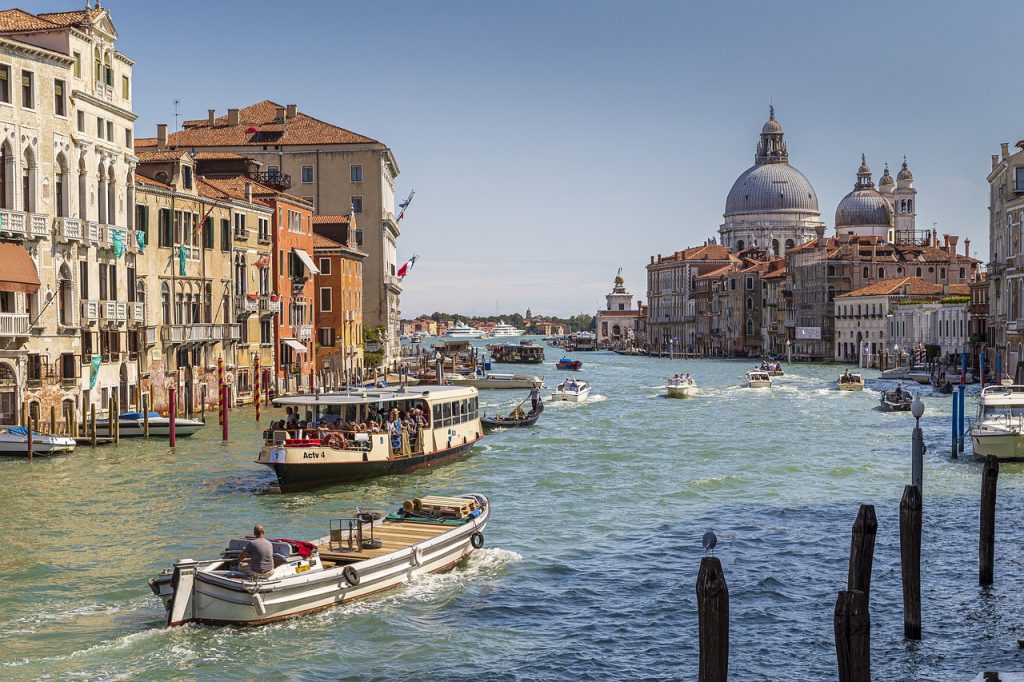 Arrival flight at VENICE MARCO POLO airport., meeting with the guide,transfer to HOTEL **** in Castelfranco Veneto and check- in.

14.30: Meeting with the guide in hotel and departure by bus to

Villa Cornaro was mainly constructed in 1553-1554, with additional work into the 1590s, after Palladio had died, for Giorgio Cornaro, younger son of a wealthy family.

It represents one of the most important examples of a Renaissance villa during this time frame. The north façade (illustrated) has an innovative projecting central portico-loggia that is a flexible living space out of the sun and open to cooling breezes. The interior space is a harmonious arrangement of the strictly symmetrical floor plans on which Palladio insisted without exception.

The building of Villa Emo was the culmination of a long-lasting project of the patrician Emo family of the Republic of Venice to develop its estates at Fanzolo. The Emo family’s central interest was at first in the cultivation of their newly acquired land. Not until two generations had passed did Leonardo di Alvise Emo commission Palladio to build a new villa in Fanzolo. We unfortunately do not have any firm dates for the commencement of the new building: the years 1555 or 1558 have been proposed.

Back to hotel and dinner in restaurant at walking distance.

8.30: departure by bus for full day guided tour of Vicenza, meeting with the guide directly in Vicenza and beginning of private visit of historical centre including the beautiful Teatro Olimpico.

Time at disposal for free lunch.

Meeting with the guide and transfer to

The Palazzina and the Foresteria have frescoes by Giambattista and Giandomenico Tiepolo, hired in 1757 by Giustino Valmarana. The Villa takes its name from the statues of the 17 stone dwarfs, originally placed in the garden, now on the walls surrounding the house.

Villa La Rotonda is a Renaissance villa designed by Andrea Palladio. The proper name is Villa Almerico Capra Valmarana, but it is also known as La Rotonda. The name “Capra” derives from the Capra brothers, who completed the building after it was ceded to them in 1592. Along with other works by Palladio, the building is conserved as part of the World Heritage Site “City of Vicenza and the Palladian Villas of the Veneto”

8.30: departure by bus for the full day guided tour of Riviera del Brenta and Padua, meeting with the guide directly at VILLA FOSCARI MALCONTENTA in Mira and beginning of the visit.

Villa Foscari is a patrician villa in Mira, along the Brenta canal, designed by the Italian architect Andrea Palladio. It is also known as La Malcontenta, a nickname which it received when the spouse of one of the Foscaris was locked up in the house because she allegedly didn’t live up to her conjugal duty.

Villa Pisani is the name shared by a number of villas commissioned by the patrician Pisani family of Venice. However, Villa Pisani usually refers to a large, late baroque villa at Stra on the Brenta Canal. It was begun in the early 18th century for Alvise Pisani, the most prominent member of the Pisani family, who was appointed doge in 1735.

Transfer to PADOVA and time at disposal for free lunch.

15.00-18.30: Meeting with the guide and tour of historical centre and Scrovegni Chapel.

Padua is one of the oldest and at the same time most dynamic cities in Italy. In the elegant city centre, rich of wonderful examples of medieval, Renaissance and modern architecture, visitors feel a peculiar atmosphere mixing urban lifestyle and ancient traditions.

City of arcades, with its medieval aspect characterized by old gates, walls and bastions.
City of frescoes, the frescoes by Giotto in the Scrovegni Chapel, by Giusto de’ Menabuoi in the Baptistery next to the Cathedral, by Andrea Mantegna in the Eremitani Church or other masterpieces such as the Angels by Guarieto.

City of waterways, with its canals where tourist navigation on river is still an important activity nowadays. Transfer back to hotel.

09.15: Meeting with the guide directly at the parking.

Transfer by private boat to CHIESA DEL REDENTORE and visit.

This church is considered one of Andrea Palladio’s works or art in religious architecture. It was commissioned by the Venetian Republic’s senate in 1577 as a memorial church consecrated to Christ the Redeemer in thanks for the end of the plague in 1576.

The work represents one of the principle Renaissance works of art.  It was finished in 1592 after the death of its famous architect, Palladio.  It was faithfully carried to fruition by Antonio da Ponte

CHIESA SAN GIORGIO MAGGIORE WITH THE MAGIFICENT VIEW FROM THE BELLTOWER

The Island of San Giorgio Maggiore is located in Venice Lagoon, opposite the Basin of St. Mark’s, just a few dozen meters from the island of Giudecca. At the time of the first doges it was called Cypress Island, had a few people who worked in a salt mine and a windmill and already there was built a small church (790 ad) dedicated to San Giorgio The construction of the Church of San Giorgio (the one that can still be admired), began in 1566 and was designed in Neoclassical style by the great architect Andrea Palladio, and continued until his death (1580), then continued under the direction of Longhena that led it to completion in 1610.

Transfer by boat to Saint Mark’s Square where the group will enter to the Basilica (with “skip the line” to avoid queue).

17.00: Transfer to airport for return flight.