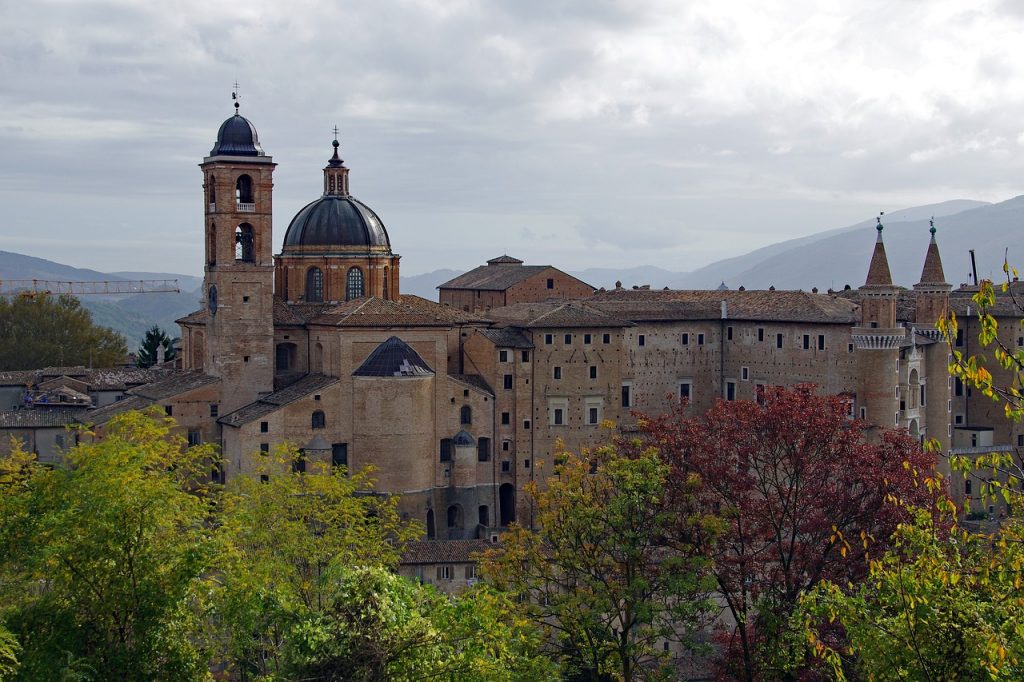 Arrival flight in Rome Fiumicino airport. Meeting with a French Speaking assistant and transfer to Spoleto directly to a  4-star hotel.

Meeting with French speaking guide at the hotel and visit of Galleria Civica d’Arte Moderna. Dinner in a typical Umbrian restaurant.

Breakfast and check out. Meeting with the guide at the hotel and departure on foot to visit the Dome.

Departure by bus to Macerata. Meeting with the French speaking guide in Piazza della Libertà and guided tour, on foot, including Piazza dell Libertà, Palazzo Ricci and Palazzo Buonaccorsi.

Palazzo Ricci was built in the second half of the sixteenth century as a private noble urban residence on an area that previously belonged to the Cistercian abbey of Santa Maria di Chiaravalle di Fiastra.

Palazzo Buonaccorsi In the heart of the city stands the eighteenth-century palace wanted by the Buonaccorsi family following the achievement of the city patriciate in 1652 and the investiture as count of Simone Buonaccorsi in 1701 by Pope Clement XI.

Inside, the large oak-paved atrium, the decorated loggia and halls, the coffered ceilings and the mythological paintings of the noble apartment offer visitors precious Baroque and Rococo moments, whose splendor reaches the apex in the Hall of the Aeneid. Departure to Sirolo (42 km).

Check- in in 4-star hotel and dinner.

Breakfast in hotel. Departure by bus to Urbino (114 km).

In the afternoon visit of the Oratorio di San Giovanni and the Raffaello’s birthplace, the place where he was born on Good Friday 28 March 1483, and where he lived the first years of his artistic training at the school of his father, Giovanni Santi, also an established painter. Departure by bus to Sirolo.

Meeting with French speaking at the hotel and departure by bus to Loreto (13 km). Arrival in Loreto and guided tour  including the Santa Casa. The Basilica of the Holy House is one of the main places of Marian worship and one of the most important and visited Marian shrines in the Catholic world. Pick up of clients in Loreto and departure by bus to Ancona (21 km/40 min). Visit of Pinacoteca.

Meeting with the guide and bus and transfer up to the Cattedrale San Ciriaco (the dome of Ancora) and the Archaeological Museum. Departure to Sirolo. The guide will stay until the arrival at Hotel.

Breakfast in hotel. Departure by bus to Jesi (45 km).

Departure by bus to Sirolo.

Breakfast in hotel and check out. Departure to Ascoli Piceno.

Meeting with French speaking guide in Via Dante and guided tour (max 3 hours) on foot, including the Dome.

The Marche region is characterized by the rare beauty that has made it a land of great personalities, from Giacomo Leopardi to Raffaello, from Giovan Battista Pergolesi to Gioachino Rossini.