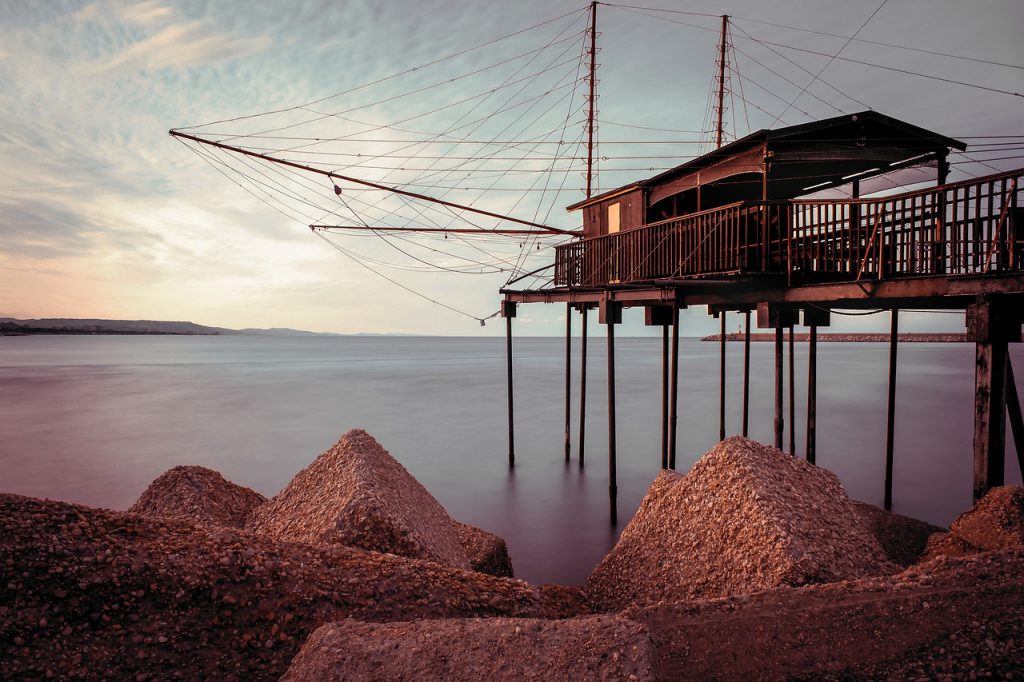 In the early afternoon, meeting of the participants with the local guide at the hotel and guided tour on foot of the city centre of Pescara, the city of Gabriele D’Annunzio. We will visit the Cathedral of San Cetteo, in the Abruzzese Romanesque style, personally financed by the writer and the exteriors of the writer’s house, declared a national monument in 1927. To follow, the colourful and characteristic alleys of “Pescara Vecchia”: the neighbourhood, at every step, brings out the past glorious of a maritime city, which was one of the most important ports of the Roman era. To the end of the walk, free evening.

Breakfast at the hotel and transfer to Atri, a delightful town perched on a spur surrounded by oaks and olive trees. For its well-preserved historic centre, rich in monuments, stately palaces, museums, characteristic alleys and squares, adorned with plants and flowers (many times awarded by Italia Nostra, which has its headquarters in the city) has been declared a city to all intents and purposes of art. Visit to the cathedral dedicated to S. Maria Assunta, one of the most significant examples of medieval Abruzzo architecture, internally enriched by a remarkable decoration pictorial. Visit of the Capitular Museum, an ancient Benedictine-Cistercian monastery of the XII century, located close to the Cathedral, where a very noble cloister on three-sided and two-story.

The afternoon is free and we recommend a visit to the Calanchi nature reserve, a splendid oasis WWF created to preserve about 600 hectares of nature, flora and fauna. The badlands, forms of erosion which here take on an impressive appearance, giving the landscape qualities of uniqueness and charm extraordinary.

Breakfast at the hotel, check-out and departure for Guardiagrele, an authentic treasure of Majella’s Park, is one of the “most beautiful villages in Italy”. Meeting with the guide and visit of the village, known as the “city of stone” of D’Annunzio, Guardiagrele is a town in Abruzzo which houses many interesting architectures. Stop in a historic pastry shop for tasting typical sweets, including the “sise delle monache”, a typical cake from Guardiagrele. Another peculiarity of the village is the high concentration of artisan shops that follow one another along the streets of its centre historical, in addition to a renowned tradition linked to the working of more or less noble metals, in particular wrought iron, copper and gold. Visit to an artisan workshop among the oldest before to proceed to Chieti. Free time for lunch. In the afternoon guided tour of the centre historical that preserves an artistic heritage of particular value, including the famous Cathedral of San Giustino. Visit of the National Archaeological Museum of Chieti, which houses the most important collections of archaeological finds brought to light in the Abruzzo region.

Transfer to Pacentro for check-in at the hotel and free evening.

Breakfast at the hotel and transfer to Sulmona. Meeting with the guide and visit to the town, famous for being the birthplace of Publio Ovidio Nasone, for medieval churches and for production of colourful confetti that, grouped in bunches, color the elegant streets of the center.

Walk in the historic center: the Cathedral, built in the 7th century, rebuilt in 1076, has suffered damage from a long series of fires, sieges and earthquakes; the palace of the Holy House dell’Annunziata, one of the masterpieces of civil architecture in Abruzzo; the Church of S. Francesco della Scarpa, originally from the 13th century, rebuilt after the earthquake of 1706; the aqueduct formed by a theory of 21 Gothic arches, emblem of medieval Sulmona.

The afternoon is free: we recommend a visit to Scanno, one of the best-known villages in the Abruzzo’s mountain, famous for its unmistakable views and for its lake, the largest natural basin of the region.

Breakfast at the hotel and free morning. We recommend a visit to the Badia Morronese, imposing building founded by Pietro Angeleri, future Pope Celestino V, who became la mother house of the Celestinian order. The church has a scenographic facade redone after 1706 and inside, in the Caldora chapel (1412), a cycle of frescoes fifteenth-century of late Gothic culture of strong expressiveness.

Continue to the countryside around Ortona which has been one of the most popular for centuries large areas of wine production in the Center South. Stop at a local winery for a visit with guided tasting.

Check-in at the farmhouse and free evening.

Breakfast at the farmhouse and transfer to Lanciano, a pretty town on the watershed between sea and the Majella Park famous for the Eucharistic miracle and pilgrimage destination. The the old quarter is surprising for the combination of the Middle Ages and Romanticism. Visit to the Cathedral of the Madonna del Ponte, raised on three arches of a bridge dating back to the period of Diocletian. After free lunch, transfer to Ortona, overlooking a splendid sea, that of the Costa dei Trabocchi. The city has very ancient origins and its artistic treasure it would be immense if it had not been destroyed by the bombing of the Second World War world. In fact, Ortona was the scene of a tough battle between Germans and allies which led to uninterrupted bombing for six months and which involved the center of the city, so much so that Winston Churchill called it “The Stalingrad of Italy” because similarly to the Russian city Ortona he lived a long battle in the heart of city.

After breakfast, check-out and free morning to visit the Costa dei Trabocchi. It is recommended the visit to the abbey of S. Giovanni in Venere, located on a promontory, with a splendid view of the coast. In the late morning visit to an overflow, an ancient and typical maritime construction, of the real ones “Fishing machines” quite complex in their mechanisms, built on stuck poles directly in the sea or between the rocks and anchored to the shore by a multitude of cables and boards wood. Aperitif with local wine on the splendid trabocco.

Trabocchi Coast is one of the most fascinating and characteristic stretches of the Abruzzo coast due to the present of the trabocchi which enhance even more the natural beauty of this coastal stretch.